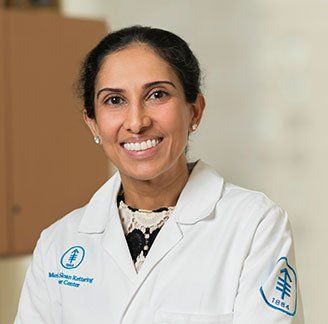 For patients with high-risk endometrial cancer, multimodality treatment is typically recommended. Hormone therapy, targeted therapy, and immunotherapy approaches have been utilized in clinical practice. In this interview, ONCOLOGY spoke with Vicky Makker, MD, a medical oncologist who treats patients with gynecologic cancers, including cervical, ovarian, and uterine tumors, about these options, as well as emerging combination therapies that are currently being evaluated in clinical trials.

Q:What is the current standard of care for the treatment of advanced endometrial cancers?

DR. MAKKER: Endometrial cancer is the most common gynecologic cancer in the United States. Alarmingly, the incidence and mortality of this malignancy continue to rise due to several factors. Chief among them is obesity. The National Cancer Institute estimates that more than 63,000 new cases of endometrial cancer and 11,000 related deaths occurred in 2018. Endometrial cancer is usually diagnosed in postmenopausal women. The average age at diagnosis is 62 years, and most women have an early stage of cancer that is confined to the uterus. However, approximately 21% of women have regional spread to pelvic lymph nodes or the surrounding organs, and roughly 9% have distant metastases at the time of diagnosis.[1] The prognosis of endometrial cancer is primarily determined by the stage and histology of the tumor, as well as the presence of adverse risk factors such as lymphovascular invasion, high-grade histology, advanced patient age, and deep myometrial invasion.

The goal of adjuvant therapy in newly diagnosed endometrial cancer is to reduce the risk of disease recurrence and distant metastases, and treatment is guided by surgical stage, tumor histology, and the number of adverse risk factors. High-risk endometrial cancers include those with type II histologies: serous carcinoma, clear cell carcinoma, and carcinosarcoma, regardless of stage; grade 3 deeply invasive endometrial adenocarcinoma; and pathologic stage III or IV disease, regardless of histology. Due to their aggressive nature and the possibility of early metastases, multimodality treatment is typically recommended for high-risk endometrial cancer, even in the setting of early-stage disease.

According to The Cancer Genome Atlas Project (TCGA), approximately 25% of serous or serous-like endometrial cancers display human epidermal growth factor receptor 2 (HER2) amplification.[3] A phase II trial of paclitaxel and carboplatin vs paclitaxel, carboplatin, and trastuzumab in stage III/IV or advanced HER2-overexpressing uterine cancers found that the triple combination regimen was associated with an improved median progression-free survival compared with carboplatin and paclitaxel (8 vs 12.6 months); therefore, it can be considered for HER2-amplified serous carcinomas or serous-like carcinomas that are advanced or recurrent.[4] Alternatively, combination carboplatin, paclitaxel, and bevacizumab can also be considered in patients with advanced or recurrent disease.[4] In the randomized phase III GOG-86P trial, bevacizumab combined with carboplatin and paclitaxel chemotherapy in advanced chemotherapy-naive patients resulted in an objective response rate of 59.5%, with a significant improvement in overall survival compared with the historic reference of paclitaxel and carboplatin and the other arms in the trial.[5] If patients cannot receive multiagent chemotherapy or have contraindications to it, single therapy options exist, including carboplatin, cisplatin, docetaxel, doxorubicin, paclitaxel, and topotecan. When single agents are utilized in the first-line setting, responses range from 21% to 36%; in the second-line setting, however, responses fall sharply to between 4% and 27%.

That covers chemotherapy, but there are also other options for the treatment of advanced endometrial cancers. Hormone therapy is one such method, and has been mainly studied in the recurrent or metastatic setting. Responses are generally best in low-grade, well-differentiated endometrioid tumors that often overexpress estrogen or progesterone receptors. There are a myriad of hormonal therapy approaches that have been investigated in small phase II trials, with response rates ranging from 10% to 33% and a median progression-free survival ranging from 1 to 10 months.[6-12] The highest responses are seen with tamoxifen alternating with progestational agents.[10,11] Currently, only megestrol acetate is approved by the US Food and Drug Administration (FDA) for the palliative treatment of advanced endometrial cancers. Other agents that can be utilized include tamoxifen, luteinizing hormone-releasing hormone agonists, and aromatase inhibitors.

Additionally, several classes of targeted therapies have been explored in advanced endometrial cancers. These include agents that target the phosphoinositide 3-kinase (PI3K) and protein kinase B (AKT)/mammalian target of rapamycin (mTOR) signaling pathways, as well as angiogenesis inhibitors, epidermal growth factor receptor inhibitors, mitogen-activated protein kinase inhibitors, and HER2-targeting antibodies. However, only a limited benefit has been seen with these agents thus far. Based on preliminary favorable findings for endometrioid histologies, the combination of letrozole, an aromatase inhibitor, and everolimus, an mTOR inhibitor, can be used in advanced, recurrent endometrioid subtype tumors.[13] Bevacizumab, a vascular endothelial growth factor antibody, was evaluated in a phase II monotherapy trial in advanced endometrial cancer and demonstrated a response rate of 14.3%, with 40% of patients being progression free at 6 months.[5] This agent is often used in patients with advanced endometrial cancers.

Finally, we have pembrolizumab, a humanized monoclonal antibody that targets programmed death 1 (PD-1). In 2017, the FDA granted the first tissue/site–agnostic, accelerated approval for pembrolizumab in adult and pediatric patients with unresectable or metastatic microsatellite instability–high (MSI-H) or mismatch repair–deficient solid tumors that have progressed following prior treatment.[14]

Q: The results of the GARNET phase I/II trial on dostarlimab (TSR-042) for endometrial cancer[16] were recently presented at the 2019 Society of Gynecologic Oncology (SGO) Annual Meeting in March. What were the key results, and how do you interpret the findings?

DR. MAKKER: Dostarlimab, or TSR-042, is an investigational anti–PD-1 monoclonal antibody that blocks the PD-1 receptor, preventing ligand binding. The GARNET study-a phase I, multicenter, first-in-human, dose-escalation study with an expansion cohort-assessed the safety and clinical activity of dostarlimab in patients with solid tumors. Participants received 500 mg every 3 weeks for 4 doses, then were titrated up to 1,000 mg every 6 weeks until disease progression occurred. Results from two expansion cohorts were reported: patients with MSI-H endometrial cancer (n = 65) and patients with microsatellite-stable (MSS) endometrial cancer (n = 125). The primary objectives were overall response rate and duration of response, as well as safety and tolerability. Patients with recurrent or advanced endometrial cancers who had progressed after a platinum-containing regimen and had not received prior anti–PD-1 or anti–programmed death ligand 1 therapy were enrolled. Most patients (56%) had received 1 prior line of therapy, while 29% received 2 prior lines, and approximately 15% received ≥ 3 prior lines of therapy.[15]

These results are encouraging, and we need to follow along as this study matures. Further investigation of dostarlimab in the front-line setting is planned in combination with chemotherapy later in 2019 (ClinicalTrials.gov identifier: NCT02715284). Overall, though, the findings are consistent with what we have seen from checkpoint inhibitors in the MSI-H patient population. The overall response rate was higher in the MSS population than has been reported with other agents, but this may stem from histologic and molecular phenotypic differences in patient populations across studies.

Q: If a patient has an MSI-H tumor, is pembrolizumab the obvious choice for treatment, or are there other considerations? In addition, is there any evidence that pembrolizumab or another immune checkpoint inhibitor could be effective for other subtypes of endometrial cancer?

DR. MAKKER: Pembrolizumab is considered an appropriate second-line therapy for patients with advanced endometrial cancer who have progressed on front-line therapy. Determination of whether a patient should receive pembrolizumab vs another therapy is dependent on the patient’s MSI status, performance status, medical comorbidities, and molecular phenotype. It has become more commonplace for patients to have their endometrial cancers sequenced through a number of Clinical Laboratory Improvement Amendments–approved platforms, so these data also factor into the decision-making process. For patients with recurrent endometrial cancer with MSI-H, pembrolizumab is approved and is appropriate for use in the second-line setting.

In terms of whether other subtypes of patients might respond to checkpoint inhibitors, I think there is still much to be learned in this space. Numerous ongoing trials are currently evaluating additional checkpoint inhibitors beyond pembrolizumab, checkpoint inhibitors in combination with other immuno-oncology agents, and other targeted therapy molecules, which I think will help us better understand the role of these agents, especially for subtypes of endometrial cancer that are not MSI-H. Another important consideration regarding these drugs is that not all patients with MSI-H disease respond to checkpoint inhibitors. For example, although the objective response rate for patients with endometrial cancer in the phase II study by Le et al reached an impressive 53%, approximately 20% of the MSI-H patients had progressive disease after treatment with pembrolizumab.[16]

Thus, although these biomarkers are helping us to better isolate the patients who are most likely to respond, biomarker imprecision remains a challenge. To better characterize patients whose tumors may respond to checkpoint inhibition, assessment of additional biomarkers-such as tumor mutational burden and mutation-associated neoantigens-is needed, and this work is ongoing. These efforts will impact our understanding and hopefully better inform us why certain MSI-H patients don’t respond to checkpoint inhibitors, and whether there is a rational path forward to combine checkpoint inhibitors with targeted or immuno-oncology agents to improve treatment efficacy in MSS endometrial cancers.

Q:Are there any other immunotherapy approaches, either as monotherapy or combination therapy, that are currently being tested for endometrial tumors?

It’s encouraging to see various rational combinations being evaluated in patients with both MSI-H and MSS endometrial cancers. There are also trials evaluating immunotherapy in combination with radiation therapy for appropriate patients (ClinicalTrials.gov identifier: NCT03192059), so I anticipate that the treatment landscape of this disease will evolve significantly in the next few years. The number of trials that are ongoing in this space is amazing, and much will be learned over the next number of years.

“Endometrial cancer is highly curable with surgery alone in the majority of cases. Our focus now is to learn how to better tailor postoperative adjuvant therapies to avoid under- and overtreatment. We also need to focus on how to further improve the management of patients with metastatic or recurrent disease, as these can be quite challenging, and current therapies have limitations. Continued molecular, genetic, and proteomic investigations are critical so that we will be able to fi nd better therapeutic options.”

There is a new way to treat endometrial, and other uterine cancers, using robotic surgery, targeted molecular therapies where needed, and integrative holistic support.  It might help you to review your 21st century options:  Uterine Endometrial Cancer Treatment Options

Anupamaa suffers from OVARIAN CANCER; Vanraj SHOCKED in Star Plus’...

Tánaiste expresses “deep struggling” to girls who’ve been affected by a...

The mixture prolongs the OS in superior endometrial most cancers